We occupied [ freespace ] in downtown San Francisco on July 22 to facilitate a group modeling session. Our purpose was to engage the community in dialogue about the dynamics behind the system driving the increase in San Francisco rent prices in the last two years (estimated to be 27% higher for one-bedroom units and 33% for two-bedroom units [1]). What better place to have such a discussion than at a 14,000 square foot space that was started as a civic experiment intended to encourage community building?

Our group of 15 participants came from the tech sector, a co-housing group, social business, urban planning, and education. We started the systems thinking modeling session by breaking the group into 3 smaller teams, each tasked to come up with factors that influence one of three primary variables below: 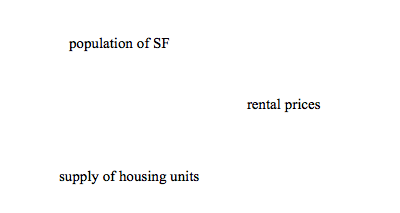 Wisdom from the group

Ultimately, prices are driven by the interplay of supply and demand – as long as more people want to move into a limited number of physical spaces, prices will be driven up (Read this first to learn how to interpret systems diagrams like the one below).

In the current environment where demand growth  far exceeds supply growth, some people will be pushed out while others will be responsible for doing the pushing. Since markets favor the wealthy, the populations more likely to be left out are lower income groups.

The Demand Side – Demand is driven by 3 central things: jobs, affordability, and culture. People move to where the jobs are as long as their salaries enable them to afford the cost of living. There is, however, a balancing loop, “housing gets expensive” to show that an increase in demand also drives rental prices up, which makes the city less affordable and ultimately decreases future demand (all else held equal). 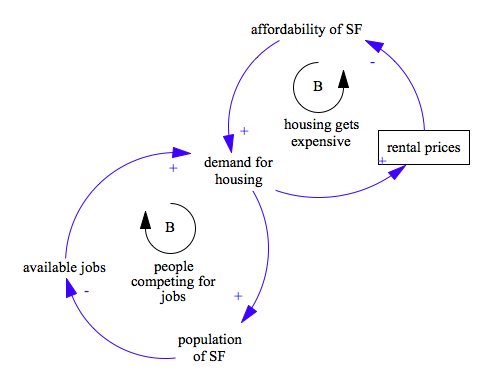 Participants quickly identified that the “housing gets expensive” loop impacts certain population groups more than others. As higher-skilled workers are migrating to the city (many from the tech sector) and driving up rent prices, affordability of SF significantly declines for the less-skilled workers. The diagram below introduces an “average salary” variable to demonstrate that while rental prices go up for all, average salary is what differentiates those who can afford to live in SF from those who can’t. The dotted line between available jobs to average salary represents the hypotheses that new tech jobs are increasing the average salary disproportionately [2], leading to:

(1) more tech employees wanting to move to SF from competing Bay Area regions (an increase in demand for housing). Data shows that more than 1/3 of Google employees live in SF. “Google, Yahoo, Apple, eBay, Genentech and Facebook operate shuttles that transport more than 14,000 people per day from San Francisco to their corporate campuses on the Peninsula.” [1a]

(2) the ability to afford living in an expensive city. 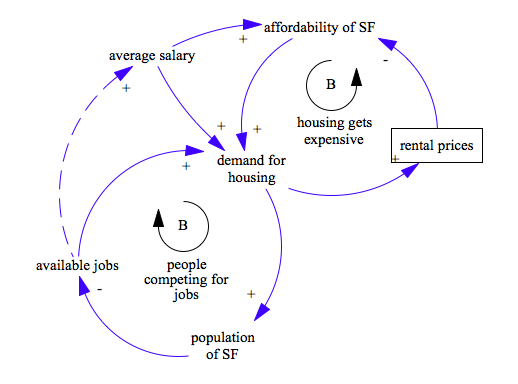 Data show that software engineers are paid an average annual salary of $115k, while a local public school teacher makes around $50k [3]. While the city enjoys benefits of creativity and innovation from young and new blood, it also generates growing nostalgia for a culture that once was. Sometimes the less-skilled became the newly homeless; other times they find new places to call home, perhaps in the East Bay.

The group also acknowledged that each high-skill job acts as a multiplier, generating demand for service and retail jobs; statistics show that on average a tech job creates 3 other jobs [4]. They were careful to point out that those are most likely service jobs in restaurants and retail, who would find it difficult to afford to live in SF. The diagram below breaks out the experiences of high-skilled (green) from the low-skilled (red).

Although they each experience the same relationships (higher rental costs make living in SF less affordable for all), the relative size of impact (thickness of arrows) differs. For example, the lower-skilled group experiences a more significant impact of higher rental prices, causing affordability to go down, which ultimately leads to a lower demand for housing from that group, and a lower population. The high-skilled, meanwhile, have higher salaries that outshine growing rental prices to make the city affordable, leading to greater demand for housing and greater population. 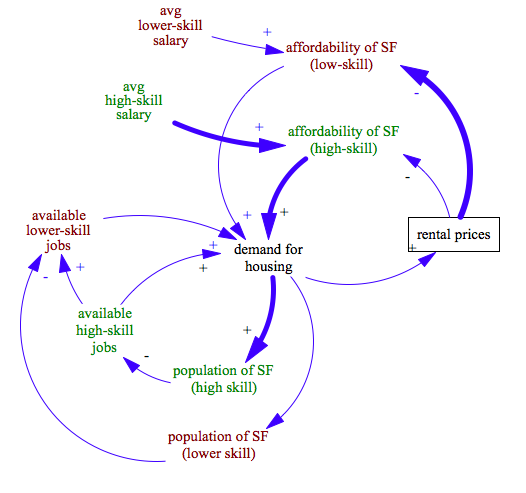 The Supply Side – On the supply side, there are two immediate balancing loops. The “people occupy spaces” balancing loop demonstrates that when supply (“available housing units”) increases, more people can move into the city, which leads to those spaces filling up and fewer spaces becoming available. The “prices adjust vacancies” loop demonstrates that when supply increases, prices fall, attracting more demand to live in SF, which then fills up any available vacancies.

We recognized that rent control depletes supply because it discourages long-term tenants from moving, which limits the actual available units currently on the market. Additionally, rent control hurts the builders of low-rent housing units more, since it squeezes into their already small profit margins. There is also little incentive for landlords to improve building facilities if maintenance rise with inflation but profits from rent are staying relatively stagnant [4a].

Strong tenant protection laws make it difficult for landlords to evict people. Other variables that affect supply are zoning laws that protect certain neighborhoods from new construction such as building high rises, and a political environment that drags the amount of time it takes to get new construction started (SF-specific government policies represented in orange below). Too many politically-charged voices cause greater indecision and a slower approvals process, demonstrating the unintended negative consequences that arise when more people are passionate about local government decisions.

We also talked about peoples’ personal expectations for how much space is needed and how we perceive the nuclear family household to look like. Currently San Francisco has a minimum requirement for space that means studio apartments start at around 300 square feet [5]. An analogous city to SF is Hong Kong — both are limited in horizontal growth by water in most directions; Hong Kong has chosen to address their housing demand by building vertically and reducing their expectations for space to minuscule standards, often under 100 square feet per person [6].

How Systems Behave and Change

Systems change, we adapt. When people are driven out, the city loses diversity and important cultural roots while gaining more unhappy commuters. As demographics shift, the city identity changes and is no longer what it once was. Instead of simply focusing on a fixed notion of what San Francisco used to be, one could also look forward to the future where neighboring cities like Oakland and Berkeley may benefit from the influx of former San Franciscans bringing new culture and community elsewhere. There also very well may be another tech bubble bursting that initiates a downward spiral of bankrupt businesses, fewer jobs, and soaring unemployment, correcting the inflated rental prices downward.

System patterns across the world and across time. Growth brings change in many good ways too – more jobs, new people, different ideas, and different cultures. Recent opinion pieces such as “How much tech can one city take?” and The Bacon-Wrapped Economy represented this demographic change as a concerning problem, one that values the insulated individual over giving back to the community. However, the problems we see in SF today happen in many urban areas enjoying significant growth. They emerged in SF decades earlier too, when white collar workers displaced blue collar workers; migration is a story of the new mixing with an unwelcoming old. The United States developed out of a more skilled group (in this case, skilled in weaponry and spreading diseases) inching into lands occupied by the Native Americans.

These foundational roots bring up contested definitions of what it means to be an American — is a place’s identity tied to who was here first and longest, or to who was here with more power and force? At one extreme, we can stop change by closing borders and mitigating competition from outside. On the other extreme, if a city is too welcoming to innovation and progress, the population makeup will be completely transformed by new faces in little time, which leads to the question “what makes San Francisco San Francisco?”

Housing systems have multiple purposes – it isn’t just about lowering gentrification and having lower prices, but also about creating jobs, growing the economy, and eliminating crime. Bad can cause some good, just as good can cause some bad. Systems don’t have just one victim; everyone acts in self-interest driven by individual incentives and world views — the mayor needs votes, young tech workers pursue their passions, and older residents want to hold onto property that they identify as their homes. Social activists fight for more social services for the poor, while working families pay taxes that fund these social services. The SF government has to balance the goal of keeping a city’s cultural roots intact while competing with their Silicon Valley neighbors for the wealth-generating population pool.

It is relatively easy to blame one event, such as as the recent migration of high salary workers to the city, as the cause of increased rents. We uncovered many other variables such as rent control (which may be inadvertently incentivizing the building of luxury units), and restrictive zoning (making it difficult to build in the first place), which are creating the squeeze for affordable low and middle-income residences.

We encourage you to think about what is important for your local community or city — if you were mayor of the city, how might you balance the competing desires of your businessmen, educators, police workers, homeless, techies, artists and line cooks?

[2] How much tech can one city take? (Modern Luxury)

[4a] Economics in One Lesson: What Rent Control Does