Models are everywhere – economists use them to forecast unemployment rates, Nate Silver uses them to predict presidential elections, Guess Jeans uses them to show window shoppers how a piece of fabric looks on a size zero waist, and engineers use them to plan the construction of a new bridge. Systems thinkers create visual models to clarify the relationships within a system. There is a field called System Dynamics where practitioners create mathematical models to test the longterm behaviors of a system.

“Mathematical modeling” might sound like something that only those people can do, but actually what’s more important than the math is the thinking that goes behind it.  Even if you can geek it out with complex math equations, if you can’t think holistically, you’ll just end up with a flawed model that appears deceptively intelligent to a math-phobic audience.

What is a model?

First of all, what is a model? The word model traditionally refers to a smaller version of something. Humans recognized long ago that boiling something down to a simpler form can help us wrap our heads around things in totally new ways.

Maps are models of our geographical environment that take enormous stretches of land and cram them into single pieces of paper,  sacrificing the vivid detail of the real world with the big picture needed for planning. It is up to the mapmaker, the modeler, to choose the components of reality that are essential for the intended use. This is why hiking maps look so different from driving maps, including details about elevation and steepness that wouldn’t matter in a car.

Many types of models

Similarly, model airplanes, models of communities, mathematical models of social security, even fashion super models help us to process reality from a new perspective and provide us with tangible objects to reference in conversation. We can compare models, challenge them, and use them to explain decision making.

Meanwhile, ‘mental models’ are the ubiquitous, but often unspoken models that drive our thinking and decision making. You could call a person’s collection of mental models their worldview or perspective. We use mental models all the time whether or not we are aware of it, and whether or not those models were intentionally developed.

Our brains constantly filter and interpret the enormously complicated reality we observe, and we often throw out the parts that don’t fit into our existing mental model, which means we lose out on many learning opportunities. The fact that mental models are hidden in our heads makes them difficult to recognize and challenge.  They emerge and solidify gradually as we acquire experience with certain problems or situations.

Mental Models of the Stock Market

For example, someone trying to decide whether or not to buy Apple stock will likely consider its historical performance. She may look over the last five years and see that Apple’s value was growing consistently for about four years, but has been declining for the last year. In the stock market, everyone wants to know, “what’s going to happen next?” 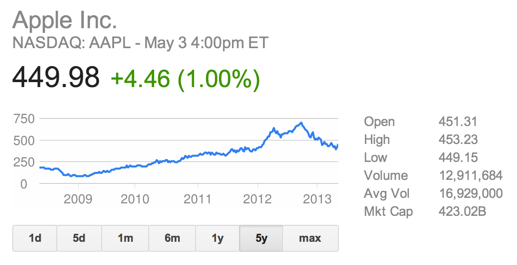 Andrew may believe that Apple will continue to make great innovative products, so it must go up. Jenny might believe that Apple’s next big proposed product, a high-tech watch, is doomed for failure, so she would sell. Carlos, an analyst at a big investment firm, asks a slightly different question – is Apple overvalued or undervalued by investors, regardless of historical performance?

Each of these interpretations of reality – the different rationale for the decision – result from different models. There must be only one truth about what will happen, but that truth is as complicated as the 300,000 jobs associated with Apple, the labor market, electronics consumers, natural resources, and the millions of other investors out there, which is why we need a model. Peoples’ different models may result from access to different pieces of information or different past experiences that have shaped their understanding of valuing companies on the public stock market.

Modeling is the deliberate development of the instrument through which you perceive reality. Rather than allowing our incidental mental models to preside unchallenged over our decision making, we can actively develop our models to acquire more robust insight more quickly. We should think like modelers.

Modeling is a process that involves posing a question (i.e. Should I buy apple stock?), noting our objective (i.e. make lots of money), articulating our mental model to make it transparent, asking questions to determine what might be missing, simplifying it down to the most relevant pieces of reality to make it more useful, applying the model to make our decision, and then adjusting our model in the future based on the results.

Great! A new way to decide how to game the stock market!?… Not quite. Modeling is much broader than that.  It’s about understanding the root cause of patterns in our relationships, health, and career. Why does my family always get anxious on holidays? Why do employees at my workplace cycle through every two years? Modeling gives us a chance to answer questions from the standpoint of an observer rather than a victim lost within the system.

Overpopulation, traffic congestion, climate change, and economic growth are all systems that utilize models. We have models for every issue that we bump up against as citizens, and policymakers create policies based on the best (which often means the most popular) models. Social Security was originally conceived off the belief, or unchallenged assumption, that economic and population growth would continue on unfettered.  Many Americans today believe that they deserve Social Security because they paid into the system. Meanwhile, politicians leave the system intact despite the fact that it is unsustainable amidst an aging population. We can look at mathematical models to understand the long-term consequences of Social Security and how we might introduce reforms to mitigate the growing burden being placed on future citizens.

Modeling is the process of recognizing, sharing and improving our understanding of the world. Modeling also benefits from collaboration, so we benefit from learning language to give form to our thoughts and interpret the thoughts of others. The process of becoming a great modeler involves unleashing your inner wisdom and natural ability to ask Why.