Quiz question – Does the United States have one of the highest or lowest Corporate Tax Rates amongst developed countries? The answer is really “Both” and it shines light on the complexity of the U.S. corporate tax system. To understand how this can happen, we first must know the difference between Stated Tax Rates and Effective Tax Rates.

Stated Tax Rates – You can think of this as the “Official Rate”. The stated tax rate is anywhere from 15 – 35%. 35% applies for corporations that make over $18.3 million in taxable income, so most large corporations should be paying 35%.  Note: Also called “Statutory Tax Rate” or “Marginal Tax Rate”

Effective Tax Rates – You can think of this as the “Actual Rate”. The effective tax rate is the rate that corporations actually end up paying after seeking loopholes and structuring operations such that they get out of paying the high stated rate of 35%.

While the U.S. has one of the highest Corporate Stated Tax Rates in the world at 35%, the amount of taxes corporations actually pay (as a percentage of GDP) is lower than nearly every other developed nation. (Source)

The graph below created by the Heritage Foundation compares the U.S.’s high stated tax rate (red line) against the OECD Average, which is a proxy for industrialized nations (blue line). Note that the rates presented are Combined Corporate Tax Rates (Federal plus State). 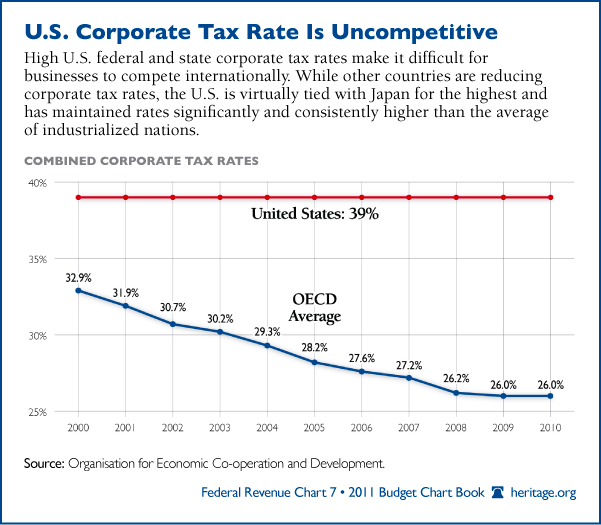 However, most large companies pay much less than 35%. Over the last five years, of the S&P 500 biggest publicly traded American companies, 115 paid a total corporate tax rate of less than 20%, and 39 paid less than 10% (Source). Even companies in the same industry may pay very disparate rates. Between 2008 and 2010, FedEx paid an average tax rate of less than 1% while UPS paid an average rate of 24%. Such wide disparities can harm competitors if one company is benefiting significantly more from tax incentives – are they really doing things that differently to justify a 23% difference in tax savings?

What’s Unfair about High Tax Rates?
The high Stated Tax Rate of 35% can do more harm than good because it encourages more resourceful companies to hire large numbers of tax specialists to help them find loopholes in the tax code. In fact, General Electric’s internal tax department has been called the world’s best tax law firm because it “includes former officials not just from the Treasury, but also from the I.R.S. and virtually all the tax-writing committees in Congress.” (Source) Companies like GE treat their tax departments more like profit centers than compliance centers.

Meanwhile, startups and small businesses suffer a disproportionate amount because they don’t have the same amount of resources to hire a dedicated tax strategy team. They have to spend a larger portion of their staff hours and dollars just to navigate the complex regulatory tax environment.  Some studies argue that startups are responsible for the majority of new jobs created in the U.S., so we should be supporting their growth in products, services, and hiring rather than throwing them into a sea of tax regulation.

The Corporate Response
Let’s take a systems thinking approach to understand the cause-effect relationships at play in the corporate tax system. The systems diagram below shows how corporations may react to a high stated tax rate.

The higher the Stated Tax Rate, the higher the Perceived Tax Payments, which incentivizes corporations to find tax loopholes.

Companies will try to do two things:

For example, when Congress threatened GE that it would let the most lucrative tax shelters expire in 2008, G.E. officials hired an army of outside lobbyists and influenced financial companies to send letters to Congress (Source). Companies like GE, due to their size and large amounts of net income, enjoy a larger degree of Financial and Political Power to further influence their tax rates to decline.

As Loopholes decrease the Effective Tax Rate, the total Corporate Taxes Paid falls, which feeds into less U.S. Government Revenues.  The chart below shows how corporations today are paying a smaller share of total government revenues today compared to the 1940s.

As businesses compete at a global scale, companies don’t want to pay a single percent more in taxes than their competitors abroad do (represented by red arrows in the systems diagram below). Some argue that the high stated tax rate pushes American businesses to move operations abroad where tax rates are much more generous. When this happens, the U.S. suffers because the government cannot collect tax revenues, profits are not being reinvested into U.S. research and income-generating activities, and companies hire fewer U.S. employees. When unemployment increases, so does the government deficit as workers qualify for unemployment insurance. During times when the economy is weak, the government is often spending significantly more money to support the growing number of unemployed.

Blame the System, Not the Corporation
It seems like companies today can do many things to avoid paying higher taxes, but this is true for anyone, not just corporations. If you put a person on the street into the seat of a CEO, there’s no way that this person will say, “I’m fine with paying 35% while my competitors are paying less than 20% and are taking in a lot more profits because it’s the right thing to do.”

Individuals rich and poor also seek self-interest and find loopholes that enable them to pay lower taxes. For example:

Rational people will choose to pay less if they can get away with it.  It’s not that wealthy people and corporations are evil or that poor people are lazy, but they are all incentivized in this system to do what’s best for themselves.